Christmas shopping is considered one of the most stressful activities for a consumer and if you’ve ever been to Oxford Street in December you know what it’s like to get stressed even walking down the road. No surprise most of us have moved shopping online and avoid crowded department stores in favour of the comfort of our own homes. Last month, during Black Friday sales (deemed the busiest shopping day of the year) an additional online trend was visible in consumer behaviour.

Shoppers used their mobile phones to eliminate friction and disruption during the busiest shopping day of the year. In fact, mobile phone shopping represented 68% of all digital traffic during Black Friday (up from 62% last year).The busiest time for mobile online shopping was after dinner when people were clearly settled down on their sofas, between 8 – 10 pm that evening. We expect a similar representation of mobile phone usage to aid Christmas shopping this year.

What’s interesting for us here at DrDoctor is the fundamental shift in the way that consumers are acting. Instead of going to the shops, or even going on their desktops, they are now shopping on their mobile phones on the couch in the evening, causing minimal inconvenience and maximum efficiency of using their own time without disruption. 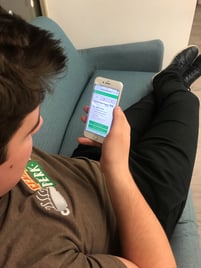 This ubiquity of the mobile phone is a phenomenon that reaches beyond shopping for presents. People are turning to their mobile devices to control their lives and most aspects of their routine, using maps on your phone to find your way, ordering an Uber with a couple of clicks, buying your groceries while sitting on the train home, and looking for your soulmate on a number of dating apps. This is what the new normal looks like.

If hospitals don’t take advantage of this shift soon and learn to harness the power in people’s mobile phones, the entire healthcare industry will miss out on a massive opportunity. If we look at the context of wider health, huge potential exists in how reachable people now are and how easy communication has become using mobile devices that people carry with them everywhere they go. Hospitals and clinicians can nudge people’s behaviour easily, with gentle disruption. A simple text message can influence patients to get back on the right track or serve as an early intervention tool before people become sick.

Hospitals using the DrDoctor solution can communicate with patients in their preferred way, while minimising disruption and time delays. People gain autonomy over their own health and wellbeing and healthcare becomes another smooth-running operation that you control from your mobile phone, in the same way that you control most other aspects of your normal life. Friction is removed from the system that’s often caused by the lack of resources for hospitals to communicate with masses of patients. Most importantly patients are happier and healthcare professionals can repurpose their time and resources from admin to looking after patients better.